Wooh Buddy! The kids were on a roll this weekend! I have about a thousand mini stories to tell so I’ve broken it down into another one of my crazy lists for ya’ll.

Crazy Eyes wants to wear her new leotard 24/7. Daddy bought it for her on their Daddy daughter date a week ago and I’ve had to fight her to take it off ever since. She keeps it not in her drawer, but in the treasure box that her Grandy made for her. When I asked her about it she said, “yeah, it’s treasure!” Right as I opened my mouth to remark on how sweet that was she followed it up with, “my underwear is treasure too!” and a big grin. I had to explain to her that dirty underwear belongs in the laundry basket not in her treasure box.

My bonus children are both fascinated and grossed out by nursing. They hadn’t been around it much before The Twins were born and we had to have a few weird conversations along the way. (One particularly memorable one occurred after The Boy walked in while I was pumping. After showing him a video of cows being mechanically milked we started calling it “cow time” anytime I pumped.) This weekend Crazy Eyes asked “Deedee, when I was a baby did you feed me from your booby?” (Yes, she said booby.) The Boy of course thought this was gross. We then had to have the Booby Milk discussion all over again. He wanted to know if boys could make milk. I bit my tongue and said no even though I know that its possible and was a practice among some cultures. I hate it when I have to lie but sometimes the can of worms just isn’t worth opening, especially when I know its going to tick off their Mom.

My Husband is an evil, terrible man. Not really but he did try to give me a heart attack this weekend. He asked me to come outside to look at some things that he was planning for the yard and to help him move some stuff around. Little did I know, he’d planted a dead snake next to one of the items that we were moving. I screamed and nearly peed my pants. I also said several choice words. He couldn’t stop laughing. He’d made it look so alive! Jerk. As you can see, it was super convincing.

I swear, the shit this child comes up with. Saturday morning we lay in bed listening to Crazy Eyes make her sisters laugh over their baby monitor. She likes to be the first one they see in the morning when she’s at our house. She started out singing and cooing to them but then the singing got weird. Her soft melody took on a hard rock quality (not unusual for her really) and her subject matter got dark. Suddenly she was singing about monsters in their room and how Jesus was going to protect them from the monsters. Good message I guess but wow the delivery was weird. She assured us that she just wanted to let them know not to be scared because Jesus protects them. We don’t call her Crazy Eyes for nothing.

As part of my 40 bags in 40 days challenge I decided to clean out my refrigerator. You know, throw out all the expired condiments (in our case pretty much everything except for mayo and mustard) and get rid of the weird stuff lurking in the back. I don’t know what possessed me to do it but when I found an expired carton of heavy cream I thought that pouring it down the drain was a good idea. Clearly I’m an idiot. The smell didn’t even have time to hit my nose before I was gagging. All I had to do was get a glimpse of the horrors inside that damn carton and it was retch city. I was on the phone with my Mom and laughing so hard between gags that I had tears pouring down my face. Every time I tried to explain what was happening I’d either retch and then laugh. I couldn’t stop laughing at how ridiculous I was being. I had to stop cleaning because every time I thought about it I’d start gagging again and then start laughing. My stomach hurt so bad once I finally settled down. I’m giggling just writing about it. 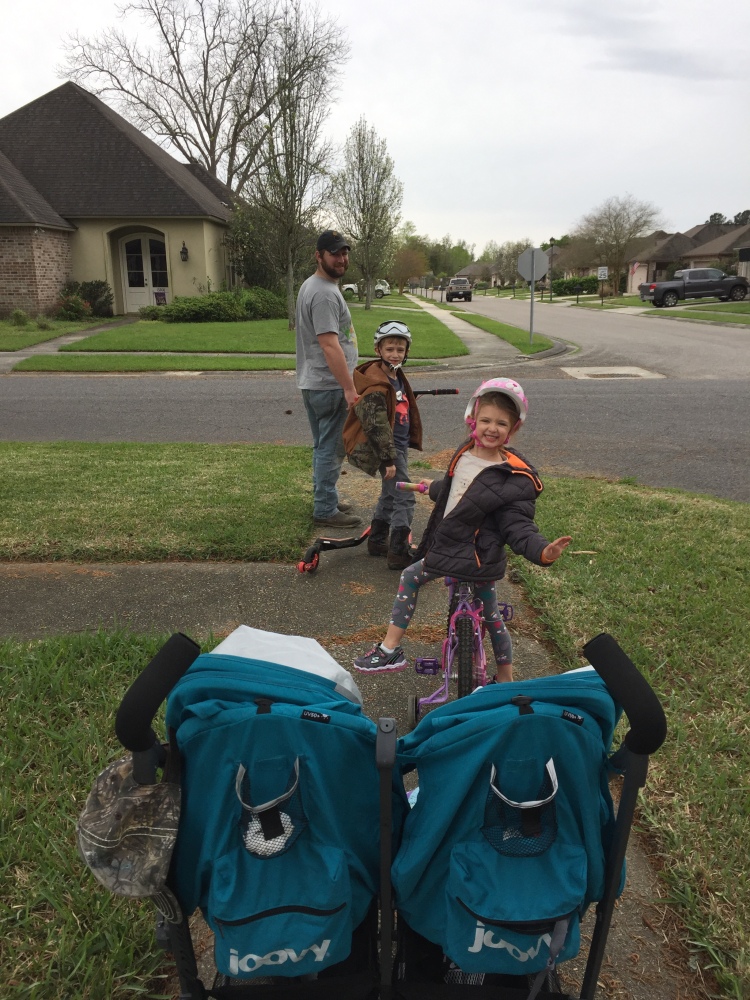 So that’s just a glimpse into our weekend. We also went on a walk, ate some tasty food (thanks Mom!), and enjoyed our family time. I also completely redid our pantry but I’ll tell you more about that later.